After four years living in Nairobi and reporting across Africa I’ve headed home to England. This blog, in hibernation for quite a while, will now be permanently put out of its misery.

You can still follow me on Twitter and, if 140 characters isn’t enough, you can read my work in Monocle where I’ve just started as foreign editor.

And you can always buy my book…

Thanks for reading and commenting – you’ve helped to make this worthwhile.

Move along, nothing to see…

Clearly maintaining two blogs is beyond me. Let’s face it, one was always a bit of a struggle.

Until the World Cup is out the way I’ll be focusing my blogging on the Africa United website.

Normal service will be resumed in July.

This won’t make a difference

Kenya’s electoral commission has just launched a new hi-tech voter registration system. Every would-be voter will have their fingerprint scanned and a digital photograph taken. Supposedly this will prevent voter fraud.

One. The problems last time had little to do with voter registration. The election was stolen in the count.

“No to Al Shabaab”

As Somalia’s government continues to warn Al Shabaab that they are about to launch a “major offensive”, the Somali hip-hop collective, Waayaha Cusub, has unveiled a more musical attack.

Apparently it’s getting a lot of airplay in Somalia. Waayaha Cusub, understandably, are based in Nairobi.

Chris Mullin spent two years as the UK’s Minister for Africa, a role that wasn’t quite as important as it sounds. Any decision worth making was carried out by Mullin’s superiors but he managed to travel a fair bit across the continent.

On one of those trips, to Kenya, he spends a day with Raila Odinga and gets his “first taste of Big Man politics”:

“All day we raced around in a convoy of gleaming Land Cruisers, mobbed by cheering crowds. At every stop a visitors’ book was produced. At first, I duly filled in my name and details across a single line. The Honourable Raila was unimpressed. ‘That’s not how you do it,’ he snorts, ‘you must fill the whole page.’ I flicked back through the book. Everyone else seemed to have made do with a single line, but that apparently is not how Big Men sign their nams.

“Honourable Raila takes the book and scrawls his signature across a full page. ‘There.’ He holds it out for me to admire. Try as I may, I cannot rise to the occasion. By the end of the day I am managing a mere three lines.”

From Mullin’s brilliant diaries, ‘A View from the Foothills’.

The BBC/Band Aid row rumbles on. Rageh Omaar yesterday took the opportunity to write a fascinating and timely piece about the inevitable politicisation of aid that happens in all conflicts. It’s worth reading in full, but here is the crucial point:

Let’s get some things straight: humanitarian operations in the midst of large-scale civil wars where territory is held by rival powers are almost always politicised and misused. The idea that this never happens and that NGOs are never put in situations where, in order to get the aid delivered, they have to work with and often through the powers that control the territory where the suffering is taking place is a ridiculous fantasy. It’s happening now, in Congo; in my own country, Somalia, where al-Qaida-affiliated groups have dictated how the World Food Programme delivers emergency food; and also in Zimbabwe, where I have just spent two weeks talking to aid workers having to work through government bodies in delivering aid to prisoners of Mugabe.

Bob Geldof wasn’t too happy with Omaar’s suggestion that the BBC story might be accurate and wrote a riposte today. Geldof might have a point but, frankly, I got lost in the forest of abuse. His 1500-word article was little more than a series of personal insults aimed at Omaar:

“how arrogant you are, how self-important…”

“your pathetic interpretation of press freedom…”

“your smug certitudes and thin pieties…”

“You people, you self-important mediators of ‘news’…”

It’s great to see such an important debate reduced to name-calling.

There were several incredible photos from Africa in this year’s World Press Photo awards, from Denis Rouvre’s portraits of Senegalese wrestlers to Malick Sidibe’s wonderful fashion series for the New York Times magazine.

So it’s a shame that the World Press Photo organisers have decided to bring the winners’ exhibition to just one venue in Africa. To put that in context, the exhibition is going to be shown at seven separate venues in the Netherlands alone.

*10 points to anyone who can guess where in Africa the exhibition will be held. No cheating.

When a politician at the centre of a scandal tells you he or she doesn’t want to comment on a story, reporters in Britain tend to write so-and-so “refused to comment”.

African papers have a different style. Julius Malema, the charismatic and controversial president of the ANC Youth League, is under pressure for allegedly making £11m from state contracts in the last two years.

The Times of South Africa called Malema about the latest allegations and quoted his response verbatim:

“Don’t you know I have a spokesman from the ANC Youth League? Stop calling me about these things, okay?”

It’s not quite as good as my favourite version of ‘no comment’, which was made by Joseph Kinyua, the permanent secretary in Kenya’s Finance ministry, to the Standard newspaper in May 2009:

Does Britain want a real pilot? 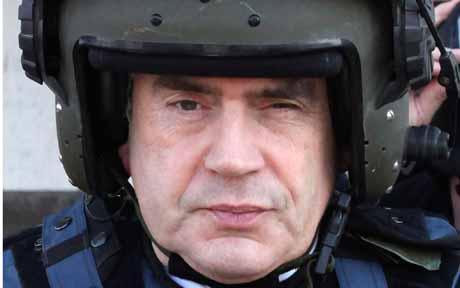 This time last year an unpopular Labour party leader with questionable personal skills was hoping to pull off a surprise election win. This was his pitch:

Labour produced billboard adverts showing their grim-faced leader with the slogan “not friendly, not trendy and not nice.”

The leader was Israel’s Ehud Barak.

At the time the New York Times claimed it was “seen as a surprisingly successful approach.” It wasn’t. Barak was hammered. Still, I think it rather nicely sums up Brown’s spiel.

Posted in Nothing to do with Africa whatsoever

The Monocle guide to plotting a successful coup

"If only I'd read the Monocle coup guide..."

Thursday’s coup in Niger is the fifth successful putsch in Africa since 2008, after a decade in which military takeovers had become less common. The African Union, which was founded in 2002, forbade coup leaders from becoming members. “Coups went out of fashion,” says Richard Dowden, director of the Royal African Society. “There were leaders like Obasanjo and Mbeki who could have a word with anyone contemplating it and say ‘don’t try it’. There is nobody who is leading Africa now. The rules have been bent a bit now.”

The recent rebellions, plus a handful of failures, provide a useful blueprint to any potential coup plotter.

Know where you are going.

A Darfur rebel group that tried to oust Omar al-Bashir in 2008 drove more than 1,000 miles across   the desert to Omdurman, the twin city of Khartoum on the opposite side of the Nile. Only then did they realise they didn’t know where the presidential palace was. They stopped and asked for directions, giving the Sudanese army time to regroup and prevent them crossing the bridge.

Don’t tell too many people beforehand.

Simon Mann’s notorious 2004 ‘Wonga Coup’ in Equatorial Guinea failed to get off the ground partly because they couldn’t keep their mouths shut. Several national intelligence agencies were fully aware of what was about to happen.

Get neighbouring countries to help.

Sudan and Chad have been supporting each other’s rebel groups for more than a decade. Laurent Kabila, who ousted Congo’s Mobutu Sese Seko in 1997, was backed by Uganda and Rwanda. Be careful though. Once Kabila was in power his one-time friends decided to stick around and help themselves to Congo’s minerals, which led to a new, even deadlier war.

Take control of the TV and radio stations.

Play cartoons or old films until you are ready to address the nation. In Niger the coup leaders opted for military music on the radio and live wrestling on television.

From my latest column in Monocle. The rest is here.